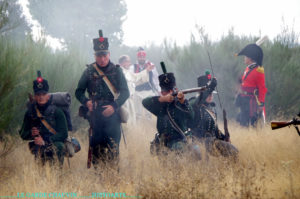 Since its formation in 1998, the group’s aim has been to represent the riflemen of Wellington’s army just as they would have been whilst on active service during the Peninsular War (1808-1814) and the Waterloo Campaign of 1815.

Our uniforms and equipment are based on examination of original examples, research into the uniform regulations and study of contemporary images in order to create as accurate an image as possible. Even our drill and tactics are taken from extensive research into, and experimentation with, the drill manuals of the time. We are a very active group, working to maintain our standards and constantly seeking to improve our impression.

Living history is a very important part of our unit as a soldier could spend more time in the camp than on the battlefield. It also gives the women and children of the unit a chance to recreate the way of life for a family of a Napoleonic soldier. Our meals are based upon period recipes and cooked over an open fire, which becomes the heart of the camp.

The 95th Rifles become quite famous in the public eye through the popular television series ‘Sharpe’ staring Sean Bean in 1993, which was based upon novels by Bernard Cornwell.