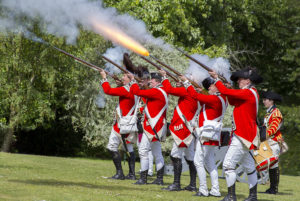 Formed in 1982, following several years of in-depth research, the Association of Crown Forces (1776) became the first UK re-enactment society to specialise in the American War of Independence. Over the years we have visited just about every English Heritage site, many of the National Trust, county shows and individual historical venues such as Portsmouth Historic Dockyard and the national Army Museum. Television opportunities have also presented themselves with such programmes as ‘The Border Country’, Richard Holmes excellently presented ‘War Walks’ and Simon Schama’s documentary ‘Rough Crossings’.

We portray the flank companies of the Coldstream Guards, the light infantry and grenadiers, as they appeared at the start of the American War of Independence and also have a number of members who portray the non-combatant camp followers and families in our living history encampment.