When you ask what the Romans ever did for us, aside from roads, aquaducts and wine, perhaps they are most associated with the wonderful mosaics that they created.

With the designs agreed the children spent a day at nearby Kingston Lacy (National Trust) where they created the mosaics, made laurel headdresses and discovered all about life in Roman times from a Roman Centurion – the marching lessons went down particularly well! 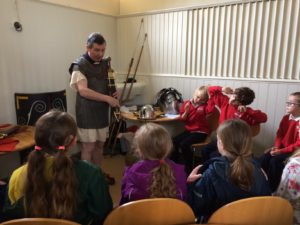 The three mosaics, depicting a vase (urn), a dolphin and dove and a Roman Centurion, shown below, will form a triptych to be mounted in the school hall.