Wimborne is delighted to be partnering with the Allendale Centre’s new Film Club, to show a number of high quality, WW1 and period related feature films in the Quarterjack Suite, tickets are available online (please click on the blue title links):

The story of T.E.Lawrence, the English officer who successfully united and led the diverse, often warring, Arab tribes during World War One in order to fight the Turks.

On the outbreak of the First World War, Albert’s beloved horse ‘Joey’ is sold to the Cavalry by his Father.  After being sent to France, in a bid to survive, Joey has an unexpected journey across war torn Europe.  Albert enlists in the British Army, and is wounded during the Battle of the Somme.  Whilst recovering in hospital, he learns of a horse, found in no man’s land…

Set in a dugout in Aisne in 1918, it is the story of a group of British officers, led by the mentally disintegrating young officer Stanhope, as they await their fate.

Charlie Chaplin’s silent film ‘Shoulder Arms’ is both fun and of historical interest, it shows Chaplin in training, in the trenches in France and on a dangerous mission as a spy across enemy lines. It was filmed whilst the War was still in progress and was very popular with returning soldiers.  The film will be shown in the Minster with live, improvised, musical accompaniment by Sam Hanson.

Note; This film is being shown in Wimborne Minster – a free event, retiring donations

Note: If lighting levels are not appropriate this event will be held in Church House Hall

A drama that tracks the story of the foot soldiers of the early feminist movement, women who were forced underground to pursue a dangerous game of cat and mouse with an increasingly brutal State. These women were not primarily from the genteel educated classes, they were working women who had seen peaceful protest achieve nothing. Radicalized and turning to violence as the only route to change, they were willing to lose everything in their fight for equality – their jobs, their homes, their children and their lives.

The Battle of the Ancre and the Advance of the Tanks 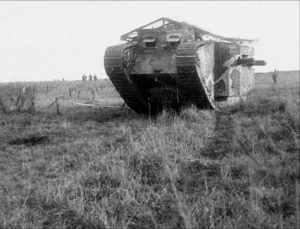 ©Imperial War Museum, still from ‘The Battle of Ancre and Advance of the Tanks’

This year, Imperial War Museums (IWM) and Wimborne History Festival are working together to show the film The Battle of the Ancre and Advance of the Tanks (1917). This little known masterpiece of British non-fiction cinema documents the autumn and winter stages of the Somme campaign on the Western Front. It includes the first ever scenes of tanks in battle, the film also conveys, with power and artistry, the difficulties experienced by the British Army as it fought on over ground beset in a sea of mud. Over one hundred years later, this unique film from IWM’s collection, is being shown to commemorate the centenary of the end of the First World War.

Supplied soundtrack: “Music by Laura Rossi. Recorded in 2012 by a 15-piece ensemble conducted by John Gibbons”